This Salmon Dial AP Royal Oak Gets a Global Release 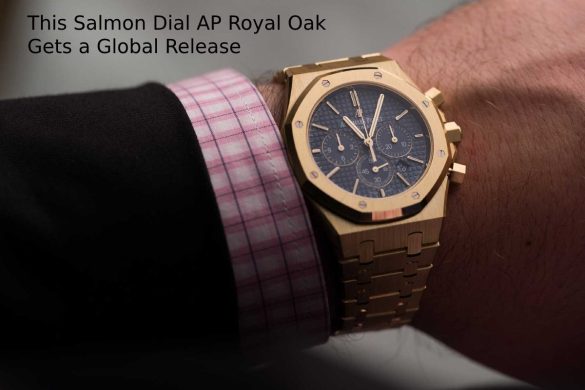 AP Royal Oak – There are a few specific features that make a watch an icon: its aesthetic design and rarity. These factors create a sense of scarcity and exclusivity that skyrockets the demand for the watch and consequently its price.

Audemars Piguet has a long history of creating watches that embody all these characteristics and this is particularly true with its Royal Oak. Watches released under this collection are limited quantities and the reasons involve more than just a marketing strategy. Due to its complex movements, which alone are costly to make and develop, these watches fetch premium prices in the market. Add that to the high-quality materials, skills and expertise, and painstaking process that goes into manufacturing each model.

Just late last year, a limited edition Royal Oak Perpetual Calendar was released exclusively in Japan. But, Ref. 26615TI.00.1220TI.01 is now being sold for retail in the global markets.

In a statement, Audemars Piguet has announced that it’s releasing another 150 units of its titanium salmon dial Royal Oak Perpetual Calendar for the global market. Initially released in December, the watch was a Japan-exclusive and it was limited to just 150 models. Of the number, 100 units were sold exclusively at Yoshida, an authorized dealer of the world’s finest luxury watches and jewelry. The rest were distributed to select retailers in the country.

These features are encased in a full titanium material that measures only 9.5mm thick. It is presented in a matching titanium bracelet, delivering a water resistance of up to 20 meters. It’s barely worth mentioning but consider it as a reminder for AP fans who might think that they have an elegant sport watch on their wrist.

Under the dial is the in-house manufactured Calibre 5134 movement which boasts a 40-hour power reserve that beats at 19,800 vph. It is distinct for its extra-thin features with a suspended barrel and an oscillating weight that is guided by a peripheral ring rolling on four ruby runners. This mechanism reduces friction and wears to the bare minimum.

This salmon dial reference is initially a 150-piece edition. But, as said above, the availability is increased to 300 pieces, giving global fans a chance to get their hands on such an exclusive offering. This is already a generous move from the likes of Audemars Piguet that prefers to keep their models limited to just about 100 pieces. For those who fancy a salmon dial watch, this AP Royal Oak reference retails for $85,100.

Other Latest Releases from Audemars Piguet

In other news, Audemars Piguet has also released eight new Royal Oak models for women and they are in a spectrum of hues. These include a quintet of rainbow gem-set versions: a purple dial chronograph with matching amethysts, a baby blue dial set in white gold, and a black ceramic model with exceptional 18K pink gold accents.

These 2021 models are a homage to the iconic design features of the inaugural model released in 1972. It was a luxury steel watch released at a time when the concept didn’t exist. As mentioned, this collection trips down the color spectrum, starting with the Royal Oak Selfwinding in black ceramic.

This 34mm reference is arguably the most interesting among the pack. It has a sleek feature that gives off a sense of versatility and a barely-there feel. It features a combination of satin-brushed and polished surfaces, finished off with 18K pink-gold hour markers, hands, and screws.

This white-gold 34mm reference has distinct frosted finish accents, courtesy of Italian designer Carolina Bucci. She has been responsible for outfitting many Royal Oak watches in her signature indentations on the surface which are achieved using a diamond-tipped tool.

While a purple dial is not exclusive to AP, it has certainly become some kind of a signature of the brand. This new 38mm self-winding chronograph boasts a regal look with its purple dial, a color that has long been associated with royalties. This connection dates back to ancient times when the color of the dye was extremely expensive.

Lastly, five new rainbow versions complete the colorful lineup. But, don’t be deceived by their fancy looks. Beyond their various, colorful gemstones are some complex features including a blackened open-worked barrel at 1 o’clock.

The salmon Dial Royal Oak watch, along with the lineup of new AP models for women, make up a strong offering from Audemars Piguet. Each carries the full DNA of the Royal Oak: bold, statement-making design with slightly over-the-top aesthetics.

Which of these watches appeals to you most? Let us know by leaving a comment.

Everything You Need to Know about Omega Watch

What Will Medicare Plan G Cost You in 2022?
How to remove nail polish? – Using Homemade Products To Remove Nail Polish
Serotonin – Definition, How Does Your Body Use Serotonin? Impact On Your Mental Health. Problems