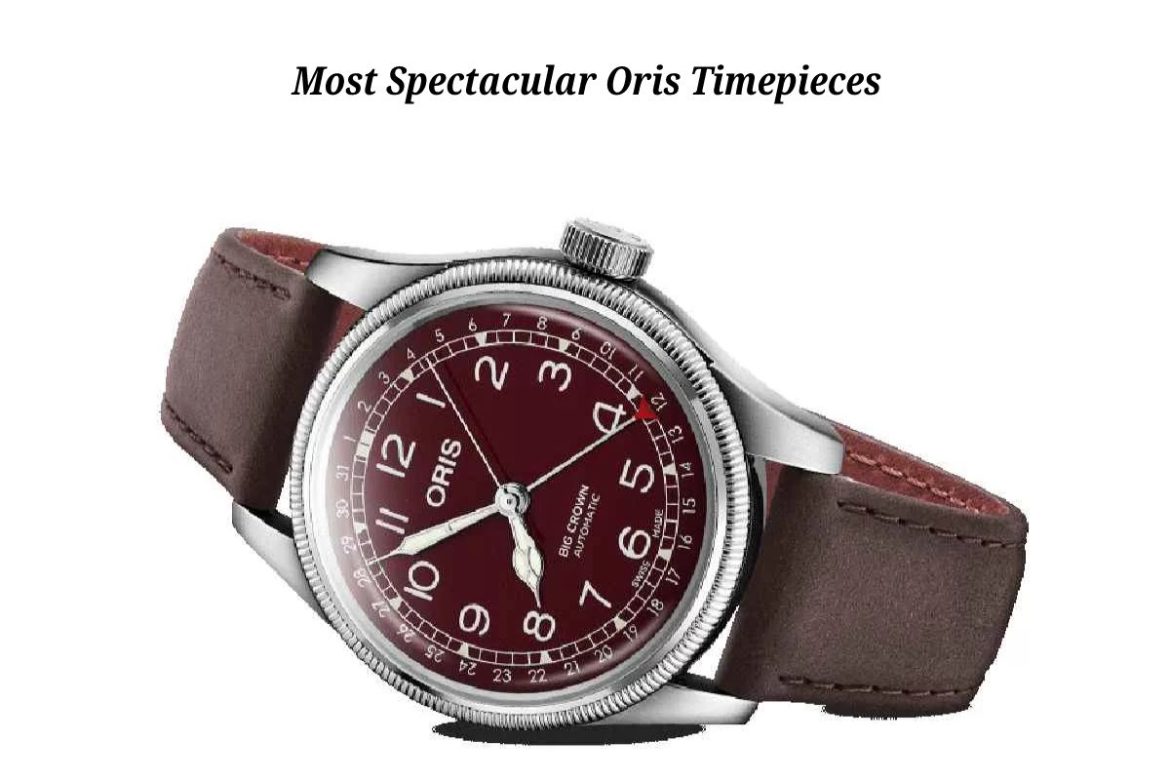 Most Spectacular Oris Timepieces – Oris has been inventing, building, and developing watches in their hometown of Switzerland for over 100 years. It is acknowledged as one of the top watch producers in the world by many organizations. The Swiss watchmaker firm established an exceptional reputation within a year of its founding in the 1900s. During this time, the company grew its output even further by hiring over 300 new employees.

After introducing their Big Crown model in the 1930s, the company entered a large market. The company has a great reputation for producing high-quality dive watches. Their revolutionary rotational safety system, designed exclusively for divers, has helped them become the famous watch brand among water sports aficionados. Oris is today considered one of the most trustworthy luxury and dive watch manufacturers. Here’s a look at some of Oris’ most stunning clocks.

The body of the limited edition’s design is similar to many of the other Big Crown Pro Pilots we’ve seen. It is designed with a stylish multi-piece stainless steel casing with a coin-edged bezel, knurled screw-in crown, and anti-reflective domed sapphire crystal glass. With a diameter of 41 millimetres, the casing fits comfortably on the wrist and is secured with one of two straps. The Oris 751 automated winding movement, based on the tested Sellita SW220-1 is inside the watch. Its precise construction and iconic red oscillating rotor are hidden behind the engraved case back and protected by a 100-meter water resistance rating. The 38-hour power reserve demonstrates its technological prowess.

Oris has created the Oris Aquis Dat Watt Limited Edition in celebration of the Wadden Sea, the world’s largest tidal system and a UNESCO World Heritage Site. The layout of the Oris Dat Watt Limited Edition is based on the brand’s iconic Aquis model. Its dial, on the other hand, displays the Northern Hemisphere moon cycle and tidal range, a decision that pays homage to the Wadden Sea and its position in the North Sea. The Oris 761 automatic winding movement powers the complication, which features a central white pointer hand that. Once linked with the correct day in the 29.5-day lunar cycle, it displays the corresponding tidal range on the dial’s white outline.

The moon’s waxing and waning are likewise indicated by the same hand. The watch is 43.5mm in diameter and comes fully equipped for diving with a screw-down case back and screw-in crown, as well as a 300-meter water resistance rating. The unidirectional bezel is elegantly designed, with a white 60-minute scale around the edge and anti-reflective coating on both sides of surrounding domed sapphire crystal glass. When you turn the Oris Aquis Dat Watt watch over, you’ll find a beautiful Wadden Sea-inspired engraving and an Oris-engraved folding buckle on the classic stainless steel bracelet.

Because of Oris’ passion for diving and expertise in the water, ocean conservation has stayed at the forefront of their work. Following a series of spectacular ocean-conservation-inspired limited editions, Oris has introduced yet another, this time focusing on the endangered whale shark: behold the Oris Aquis GMT Whale Shark Limited Edition watch. The gentle underwater giant, the whale shark, is the subject of this Oris’ limited edition timepiece. This watch, like all of Oris’ conservation-inspired limited editions, was meticulously created to bring the majestic beauty of the endangered animal it honours to life.

The dial is an excellent illustration of this, with a blue textured surface inspired by the skin of a whale shark. SuperLuminova covered hands for the hours, minutes, and seconds, as well as matching luminous indexes and a lollipop seconds hand adorn the dial. A gorgeous, brilliantly coloured orange GMT hand lies slightly recessed from the skin-inspired backdrop, working alongside the inner 24-hour track. With a stainless steel 43.5mm profile, screw-down crown, and domed scratch-resistant sapphire crystal glass treated with anti-reflective coating, the rest of the design is nearly identical to other Aquis GMT watches. The watch can show up to three distinct time zones simultaneously, thanks to its high-tech ceramic bi-directional bezel. The Oris 798 automated winding movement, based on the dependable Sellita SW 330-1, is housed within the Oris Aquis GMT Whale Shark Limited Edition watch.

Oris watches can be regarded as flexible because they come in a variety of styles. With the debut of models with a more amazing look, the brand’s appeal has surged. Oris’ unwavering devotion to mechanical automation and love for nature is seen in these timepieces. The company has an outstanding reputation, and it is known for valuing both its customers and its community, innovating to meet their requirements.

3 Qualities of Good CBD Cat Treats that You Should Know

Geometric Shapes: All About Cubes and Cuboids